Here’s a little sunshine on the Federal Reserve balance sheets. 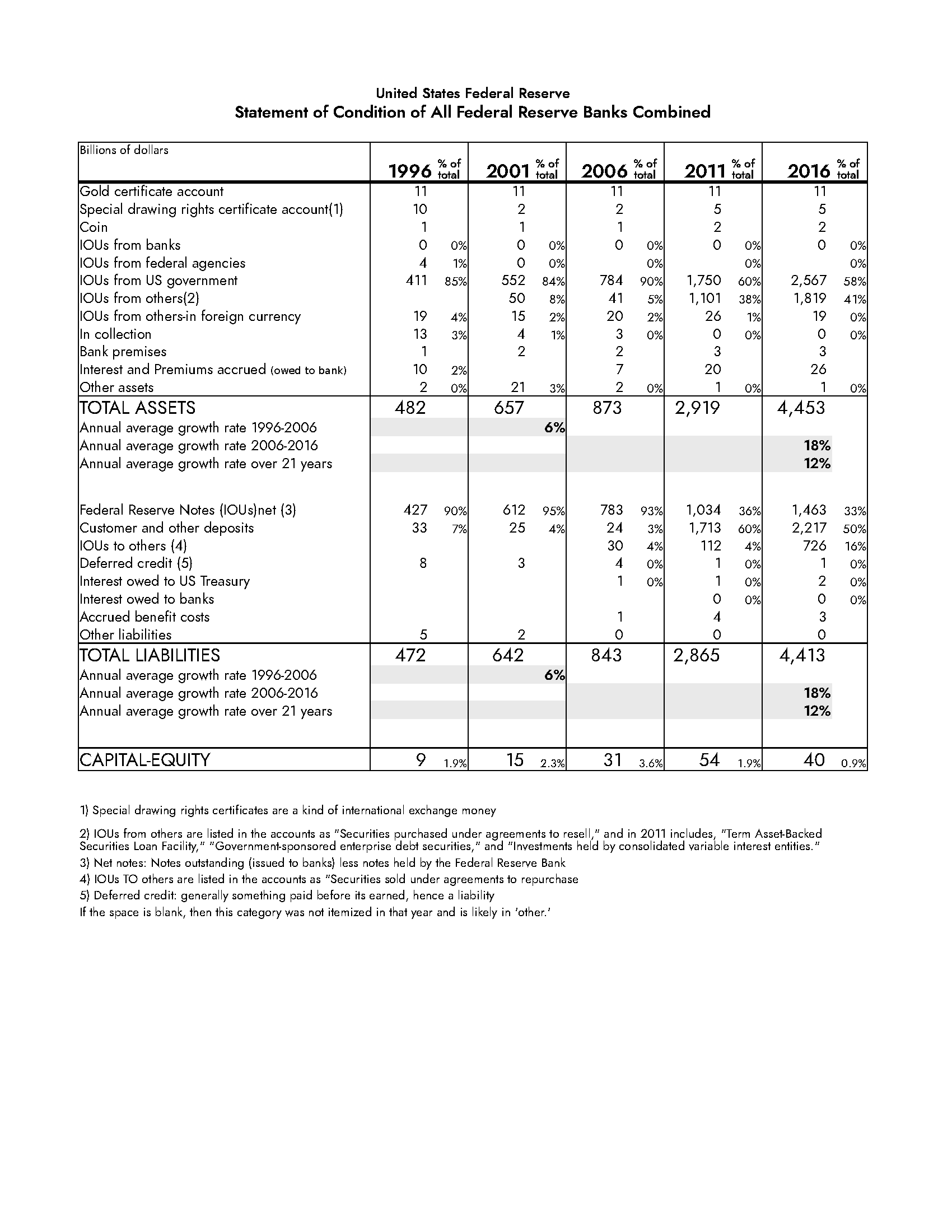 Statement of Condition of All Federal Reserve Banks Combined:

You can readily see that there are some worrisome trends. For the years from 2006 to 2016, the Fed’s balance sheet grew at an average annual rate of 18 percent. For the years from 1996 to 2006 it grew at a rate of six percent. For the past twenty years, the average annual increase has been 12 percent. If one looks back over the lifetime of our Federal Reserve System, from 1913 to the present, the assets grew by 8 percent per year. So, not only is the average rate of increase high at 8 percent, but the rate of increase is increasing. These rates of increase are dramatic and unsustainable.

Remember bank assets are mostly IOUs from others. Banks in our current system juggle IOUs from others with their own IOUs, which constitute our money supply. US government IOUs are the safe and stable anchor of banks’ balance sheets. However, US government IOUs have gone from representing 85–90 percent of the Fed’s assets, to representing 58–60 percent. Notice that the Fed assets have been growing at a steeper curve rate than the government debt. This may be because the rate of increase is so high. Citizens and lawmakers have been pushing back against the steep curve of increasing government debt (which is all we really see of the exponentially expanding money system).

Facing resistance to increasing government debt enough to keep up with the exponentially increasing money supply, the Fed has turned to creating new money for other private entities. In 1996, the Fed had no IOUs from others. In 2016, these IOUs from others represent 41 percent of the total assets. These are IOUs from private sector financial and corporate entities, some government sponsored (such as Fannie Mae and Freddie Mac). This category includes all kinds of arcane financial instruments – mortgage-backed security bundles, credit swaps, derivatives, purchase agreements with buyback contracts, sales contracts with repurchase agreements, etc. If you are interested, the Fed’s financial reports go into quite a bit of detail on these. Fundamentally, though, they are all taking IOUs and returning Federal Reserve IOUs (new money) to these financial entities, who are using these funds to shore up their balance sheets, to game among themselves, and to buy up the common wealth out from under everyone.

These activities increase the system’s tendency to transfer wealth from the many to the few. We see the impact in the dramatically increasing inequality – the rich are getting radically richer and the number of poor is exploding. I can’t see any way this system can be sustained. Can you? The system must change and can change. Chapter 6 looks at the consequences of our current system. Chapter 7 looks at short-term backwards moves, bandages and bridges. And Chapter 8 looks at simply done, but profound change to a sustainable and prosperous system.